I'm eternally grateful to my parents for letting me move back home after I graduated from Western to give me some time to find a job and save money.  The goal was always to move out by the time I was 25. But I'm surprised that I might actually move out sooner than I thought.

A friend of mine (who was a housemate during school) really wants to move up north and she said to let her know whenever I was ready to move out.  We've been talking about the possibility of mid-April being our move date but I don't know if that's going to work.  The big obstacle for me is having the finances to move out.  If I didn't have a car payment, this wouldn't be such an issue. I'm hoping that if I can't move out in April, mid-summer will hopefully be more doable. Now that I've been thinking about moving out, the more I want it to happen!

Anyway, I thought I would share the list I made up of things I need to get to move out. I need to do an inventory check of what I currently have packed away, but the list itself is actually not too big (well, I don't think it is). I'm not surprised that the kitchen is what needs the most attention. I'm going to have to restrain myself and get only what I need at first before buying all the fun stuff that I want (ah, future Sur la Table shopping spree in my future). I love cooking and baking (and eating ^_^) and now that I'm starting to actually play around in the kitchen more often, I'm not going to feel bad about spending money on stuff that I actually will use more than just once in a blue moon. I also want to have an excuse to get the Tasting Party sets from Pier 1. 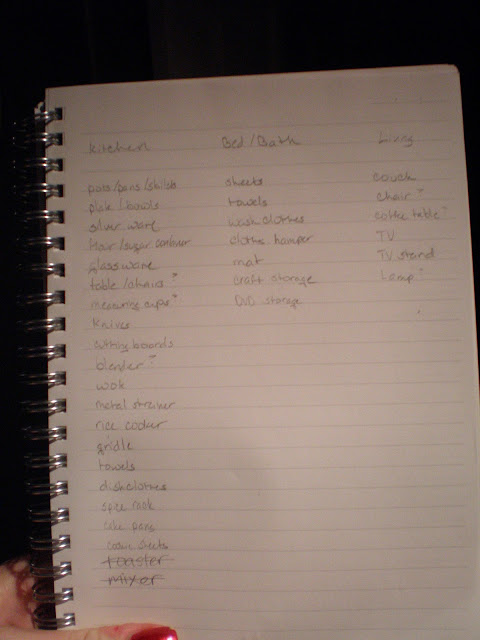 I had my parents and sister look over the list to see if I was missing anything. My sister added and crossed off toaster and mixer (I originally didn't put them on the list because I knew I had them). Both items were gifts: the toaster is a Hello Kitty one and for Christmas, I got a (much longed for) Kitchen Aid mixer!
Posted by oflifeandlists at 7:50 PM