I first learned about Phantasmat when the artist, Gracjana Zielinska, started posting concept art for it on her deviantart. I can't remember how I stumbled upon her but I love her style.  I held off buying the game for quite sometime, until earlier in the week: I really wanted to play something new, so I decided to splurge and get it.  I went for the Collector's Edition because it also included an epilogue. 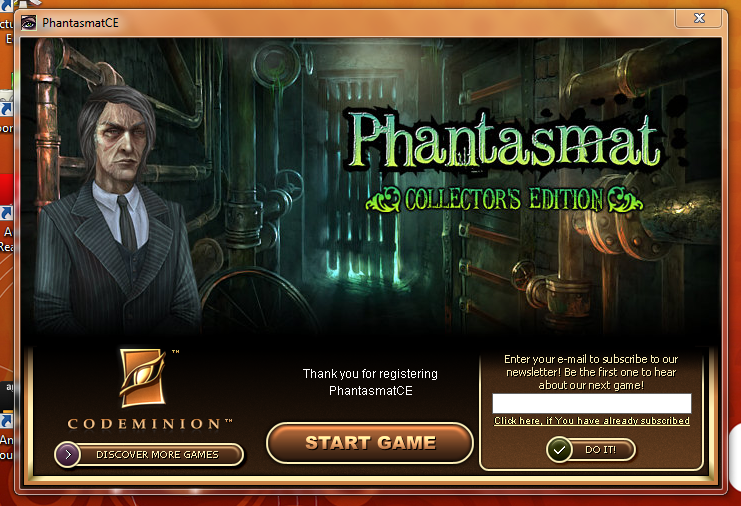 You find yourself at the Drowned Dead Hotel after crashing your car, and are pulled in the mysteries surrounding the residents and the town that is now submerged under a lake.  The story may seem typical when it comes to a supernatural storyline (spoiler: ghosts), but I love this sort of thing.  You interact with three characters, which you only know as the Hotel Owner, the Girl, and the Old Lady.  I would love to read a full on story with these, detailing background information and the like, but you can only do so much in a game. It's fairly easy to figure where you need to go next to continue the story along, and there is a task button you can click which lists off what you need to do as reminders.  The Epilogue is only unlocked after you finish the game, and only available to those who buy the collector's edition.  I have to admit, after some contemplating, I don't feel that it adds much to the overall storyline, but it's a nice bonus.

This is mostly a hidden object and match-3 game, with puzzles at pretty regular intervals.  There are three modes to the game: Casual, Challenge, and Extreme.  I played through Challenge mode (misclick penalty is mild, hint/skip button recharge normally, and there is no timer during gameplay.  On Extreme, misclicking is penalized by time deducted, you can't use the hint or skip button, and your gameplay is timed (though time is added as you find items).  It took me around 7 hours I think to complete the game in its entirety on Challenge mode, including the Epilogue.  The timing on the hidden object and match-3 in Extreme mode isn't that bad (5 minutes at the start, reduced to 4 at the current stage I'm on) and thankfully, the puzzles aren't time.  You also gain 10 seconds for each piece you find.  The best strategy I found was to play on hidden object, and switch to match-3 for items that were proving to be more difficult.  It's also not a bad idea to switch between the two, as it can give you a fresh look at the scene after you played a little bit in the matching mode.

Another star of the game besides the breathtaking art is the music. It (and the various sound effects) set up a delightfully creepy tone.  I was always expecting for someone to be right behind and for something awful to happen.  There are sections of the game where I think the music might be too dramatic.  Also, all dialogue is voiced and animated. Animation for the characters when they're talking isn't great all the time, but it's not awful and I certainly don't see it often.  I personally believe that the best voice over is for the mysterious stranger that you hear in a couple of recordings that you find.

Overall, I would highly recommend this game to anyone.  It's quick (I played this over 2 days), the story line is engaging, and beautiful both on a visual and audio level. The collector's edition also offers a few more bonus features including bios on the characters, replay spotters and replay match-3 (you can master any of the 26 scenes), concept art and wallpapers. If I had to give a number rating, I would five a 5/5 (4.5/5 if I wanted to be picky for how short it is but I literally almost played it non-stop once I started).
Posted by oflifeandlists at 3:35 PM